When I see something wrapped in a banana leaf, I am almost always interested in what’s inside. Unwrapping one such package at Momofuku Ssam Bar recently I was extra interested, because the restaurant has a new chef named Max Ng who is a citizen of Singapore, and one of the dishes he has brought with him from that country is a whole skate wing cooked in a banana leaf.

The wing was rubbed top and bottom with sambal belacan, a Malaysian sauce built on a foundation of fermented-shrimp paste. It was a little spicy and strongly, disorientingly funky in a way that gave me the feeling of trying to stand up in a small boat in high surf. On the side, Mr. Ng served a bowl of congee to act as a kind of buffer, although it was by no means bland.

Under the orange belacan I could taste the green-tea flavor of the banana leaf, drawn out by steam. Mr. Ng had intensified that, too, by charring the leaf so aggressively that it was still smoldering when it came to the table.

Smoke in restaurants is usually found in captivity these days, caged within a glass or a cloche or a bag and carefully liberated, to oohs and aahs, before it drifts toward the ceiling and is gone. This is a favorite modernist party trick that anyone can do with the right smoker and pump. It is kind of cool the first time you see it.

The smoke rising from the banana-leaf skate was the old, Promethean kind, and if I’m reading its message correctly it signaled another shift in direction for Ssam Bar. Founded by David Chang in the East Village in 2006, the restaurant evolved so quickly in its first two years that it took three New York Times reviews just to keep up.

In the very beginning, Ssam Bar sold three kinds of Korean burritos. Dana Bowen, writing for The Times’s cheap-eats column, called them “enjoyable enough,” then spent the rest of her space on the after-hours experiments that Mr. Chang and three other cooks were serving late at night, like a whole roasted pork butt, to be pulled apart with tongs that quickly become as joyously greasy as everything and everybody else at the table. 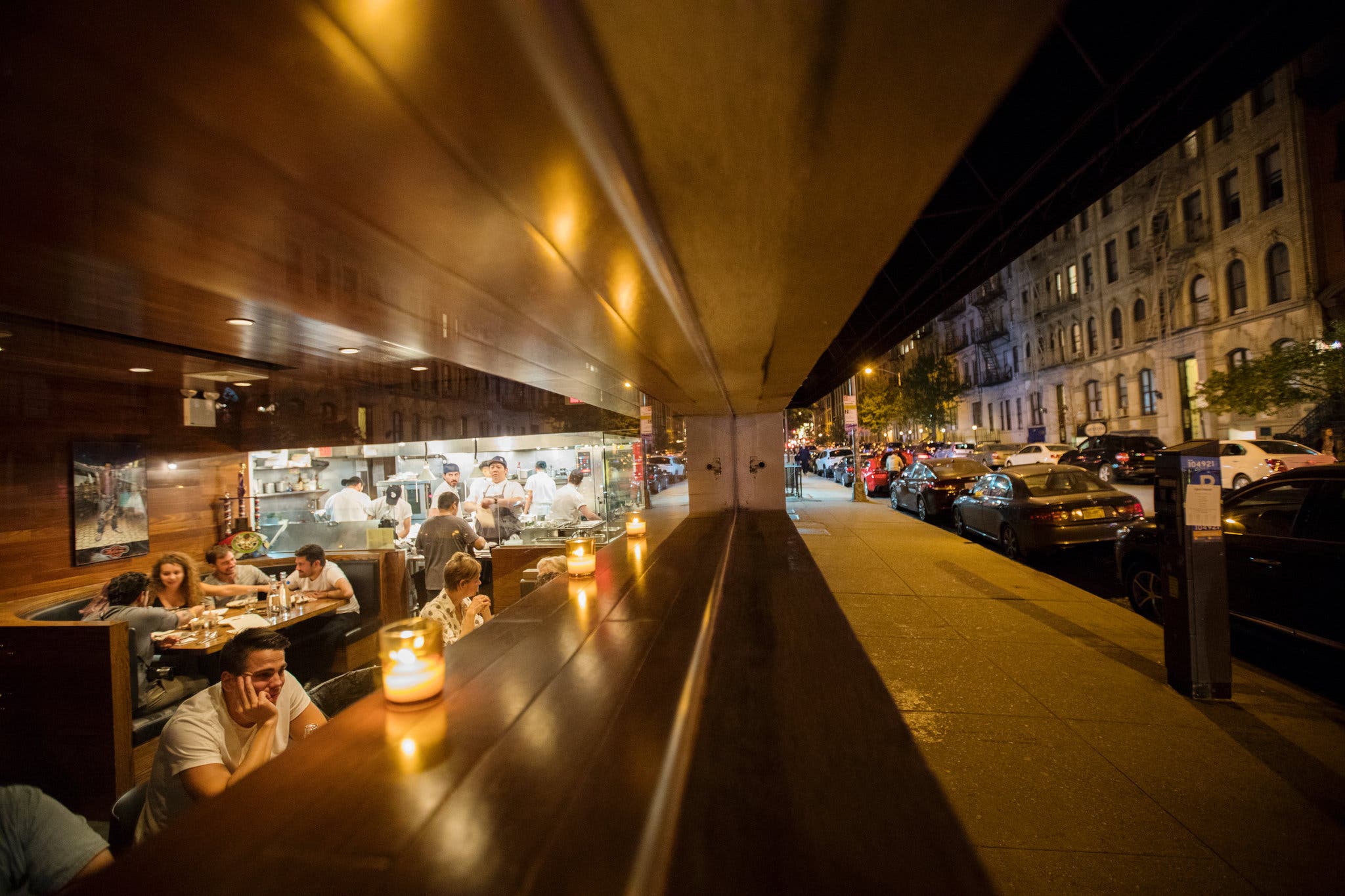 By early 2007, when Frank Bruni weighed in, the after-hours experiments had taken over the menu, which offered previously unimagined combinations of kimchi, country ham, hamachi, rice sticks, fish sauce and organ meats. Ssam Bar had become “a nearly full-fledged restaurant in near-perfect sync with the times,” Mr. Bruni wrote. Apparently it wasn’t done fledging yet; he returned in 2008 to promote it from two stars to three.

Review overkill? No. Ssam Bar wasn’t just changing its menu covers. It rewrote the rules by which critically acclaimed restaurants were supposed to operate, stripping away comforts (chairs with backs, sound systems with a “low” setting) and amenities (reservations, unshared tables), and gambling that everybody would be too stunned by the food to complain.

It worked. Ssam Bar mounted a guerrilla attack on the dining establishment, and it won before anybody quite knew what was going on, Mr. Chang included.

There followed a long period of refinement and maturation, which is more than some guerrilla outfits can say. The wine list now takes more than 20 seconds to read, and is especially worth exploring for fans of gamay and sparkling wine. (Or both — there’s a sparkling gamay.) Under Matthew Rudofker, the executive chef from 2010 until May, Ssam Bar expanded beyond pork shoulder to other sizable cuts of meat: rib-eyes, briskets, whole ducks.

Over the years, like many of Mr. Chang’s restaurant supplies, Ssam Bar was increasingly infiltrated by modern techniques, fermentation, cutting-edge plating styles and umami-building tricks. The kitchen worked at a very high level, but at times it felt slightly deracinated, as if it drew much of its inspiration from other islands in the Momofuku archipelago.

Carefully but confidently, Mr. Ng is moving away from that style and toward one of his own. He has gone back to the traditions of Asia, particularly street food and Singaporean cuisine. Like the char on that smoldering banana leaf, his techniques tend to be premodern, even though he has worked for nobody but Mr. Chang since moving to the United States in 2011, starting with an externship at Ssam Bar during culinary school and rising to chef de cuisine at Momofuku Ko.

Mr. Ng has been trying his hand at the fish-shaped cakes from Japan known as taiyaki. He has a terrific idea for what to do with them: stuff them with foie gras. In his hands they’re almost French, because he fills the molds with croissant dough rather than pancake batter and glazes the crust with honey and white port. Over the top he strews some candied puffed rice that would make a fine breakfast; the whole dish would make a fine breakfast, come to think of it, although you’d stand up afterward knowing your day had already peaked.

Sizzling eggs arrive not quite set in a cast-iron pan hot enough to finish cooking them at the table. The heat also softens a slice of pork terrine, which melts to coat the eggs. When I first tried this open-faced omelet, the eggs had been poured around a handful of chanterelles. Now they’ve been replaced by smoked bluefish.

To make one of the most original corn dishes I’ve seen in a long time, Mr. Ng cleaves the cobs lengthwise into quarters and fries them until they curl. They are dusted with spice. You pick one up with your fingers and swipe it through a black aioli of squid ink or a white streak of whipped ricotta, which will melt like butter. Then you eat the kernels from the cob as if you were gnawing the meat off a baby back rib.

These new dishes live alongside some legacies of Mr. Rudofker’s regime. There are cured sardines on long fingers of toast spread with hozon, the fermented chickpea paste that in this case plays the role of butter very well.